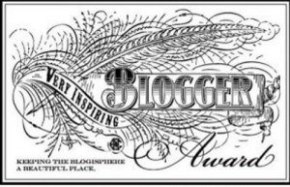 Thanks to Vic Watson for nominating me for a Very Inspiring Blog Award. In return, I’m going to tell you seven things you might not know about me.

When writing this post, I really struggled to think of seven things people might not know about me. Which is probably a sign that I tweet WAY too much. Also, I haven’t really done anything that interesting with my life, expect for read a lot of books, and then write a lot of books (most of which ended up in the Great Recycling Bin in the Sky), inbetween travelling around a bit and obsessing over boys. But here goes anyway

So there you have it, I’m a scruffy, sweary, multi-lingual shark obsessive. What’s not to like?

While you’re here, other blogs I enjoy are as follows:

This Itch of Writing – brilliant writing blog by Emma Darwin, covers most writing issues that come up

Help! I need a publisher – ditto, for publishing queries, and by Nicola Morgan

Julia Crouch – gives an interesting insight into the writing process. Julia is very good at breaking down what she actually does all day.

Steve Mosby – it doesn’t really have a theme as such, but if it did I would characterise Steve’s blog as ‘cogent arguments on the burning issues of the Twitter day’. If Twitter is the tabloid, Steve is the Times Editorial.